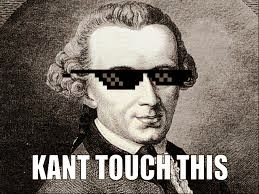 The following exchange is an excerpt from an interview I recently did. Here, we talk about "Truth" and how my philosophy has less to do with the discovery of "Truth" and more to do with the beauty in its seeking.  Kant's concept of the "Sublime" basically posits that some things are so ultra-beautiful that we can all agree--as human beings--without even having all of the words to defend the belief. The "Sublime," in my reading of Kant, links knowledge with the soul and frees the individual from the collective while at the same time acceding to the value of the group's sense. Joy links us.

The full transcript can be found here:

JL:       I think there was a time when that might have been correct. In the age when science and religion opposed each other, each vying for ownership of truth. I think what I’m trying to say is that truth isn’t absolute, it’s something approached asymptotally. It’s sought, and in that seeking we discover beauty. That beauty resembles truth. But then, not to get too Kantian here, that beauty is perceived individually. So the sum of individual beauties become the sublime…this sublime is really truth, but it isn’t unitary. It’s fractalized. It’s the sum of the deviations from the average.

MMTN:           As an author, can’t you use words that actually exist? Do you not have enough respect for language to do that?

MMTN:           I’ve read that you are a conservative. It seems odd that someone who describes himself as such would be willing to throw so many conventions out the window. Some might call that hypocritical.

JL:       I just call it open-minded. If I was arrogant, I'd call it innovative. Where do new technologies come from? People who are satisfied with the way things are or from people who imagine a different world?

JL:       Totally! Was mankind created with the entire vocabulary we have today?
Posted by Jason Leclerc at 2:54 AM